Nature » Great Horned Owls Lay Eggs in February in the Northeastern US? 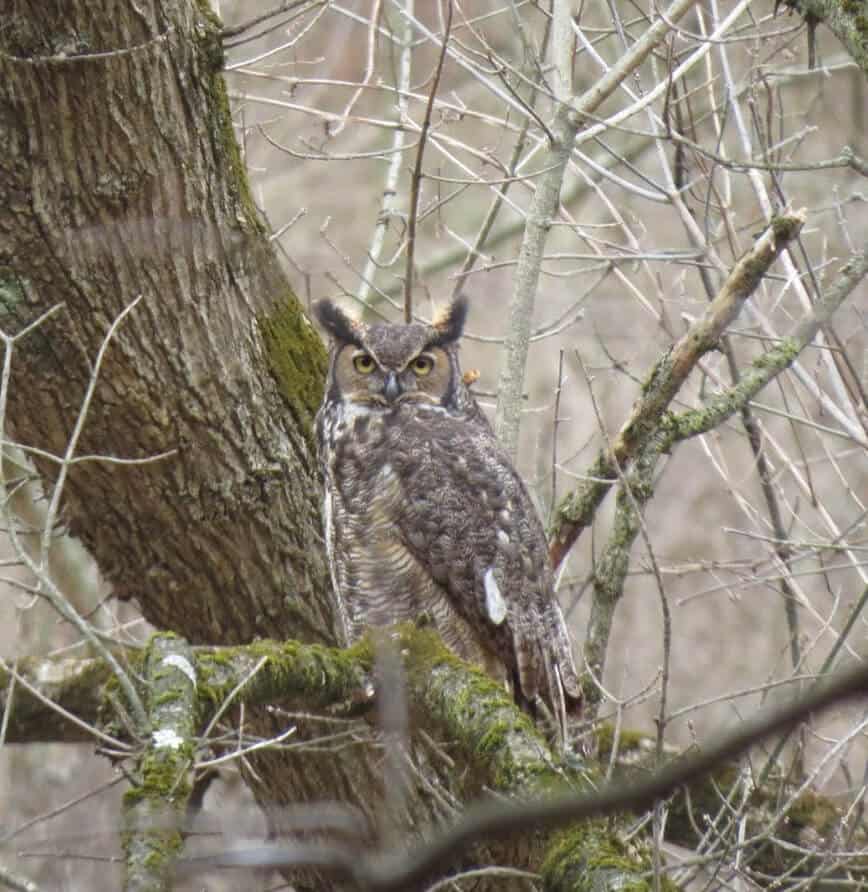 While we’re racking up our heating bill this winter, keeping the bird feeders full,  looking outside and waiting for the ground to thaw, and hoping to see the first glimpse of a snowdrop poking its leaves through the dirt, the Great Horned Owl (Bubo virginianus) is already taking care of its next generation. Somewhere out there, while the snow is still coming down, a female owl has started incubating her 1-4 (most commonly 2) eggs - which takes a total of 30-37 days. After hatching, it takes another 40-47 days for owlets to become fully feathered and capable of flight. That’s a total of 10-12 weeks.

Where to Find a Great Horned Owl

Great Horned Owls are widespread from Canada throughout the whole USA, and also throughout most of Mexico and all the way into northern parts of South America, and can be found in a wide variety of habitats. Regardless of where they live, though, Great Horned Owls don’t build their own nests. They use whatever is available, including former eagle and hawk nests, tree cavities, cliffs, artificial platforms, and will even lay their eggs on the ground.

During the day, they roost in trees and sheltered cliff ledges, but at night, they go out on the prowl for pretty much anything that moves and can be caught by their incredibly strong talons. These owls are about the size of a Red-tailed Hawk (Buteo jamaicensis) - which is also on its menu - with the female being larger and heavier than the male. 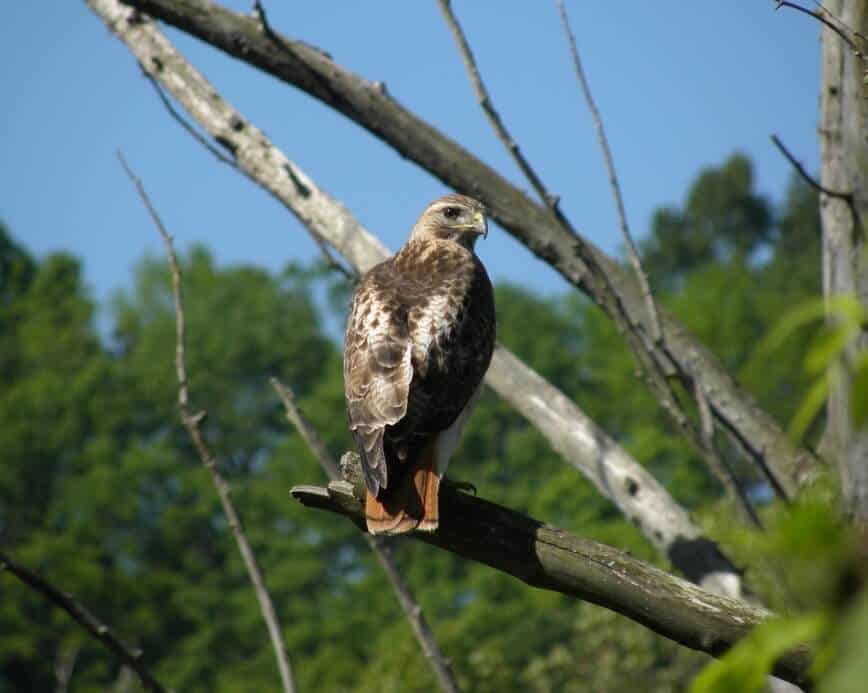 In our area, the Great Horned Owl has a lot of choices on its dinner menu, including rabbits, skunks, opossums, squirrels, house cats, voles, mice, and a variety of birds, including ducks and herons.  You get it - if it moves, it’s fair game. Mostly they hunt from a perch, but can also be found hunting along woodland edges and even open grasslands.

How to Find a Great Horned Owl by Yourself

If you’re interested in venturing out and trying to find a Great Horned Owl near you, there are two ways to increase your chances.  The first way is to go outside after dark and listen for a deep, muffled hooting, with the male’s voice being deeper than the female’s.

In the Northeastern US, this territorial hooting can be heard from early winter up until their first egg is laid, anywhere from mid-February to the end of March.  Vocally, they’re most active the first hour after sunset, and for a shorter period before sunrise.

Once you’ve heard an owl at nighttime, go back during daylight, walk the area of forest where you heard the hooting, and look for them.  I know, it’s easier said than done. Their camouflage is excellent.

Look at the trees and see if something seems out of place, like a big brownish clump extending from a horizontal branch.  And if they happen to open their eyes, you'll never forget the brilliant pair of yellow eyes casually staring at you (sometimes it feels condescending to me).  Even if you don’t find the owl the first couple of times, just looking for them is a nice excuse for a walk in the woods.

And if you’re lucky enough to find an owl, stay far away and use binoculars to watch your new friend.  If the owl starts getting restless, calmly turn around and walk away. Don’t ever approach a nest. Keep your discovery to yourself.  A pair of Great Horned Owls will stay together for at least five years or longer, and will stay in the same territory. Chances are your discovery will bring you joy for many years to come.

How to Find A Great Horned Owl with Help

The second way to find an owl is even easier - let crows find the owl for you. Crows have a tendency to “mob” whenever there is a bird of prey around, which means that they’ll generally harass the other bird until it gives up and flies away. The mobbing of crows is intense and can last for minutes before the owl finally flies off. Last spring, my “local” Great Horned Owl was found by a Common Raven parent that had fledglings nearby. It was a hoot (see what I did there!) for me to watch them argue for several minutes. They were vocalizing loudly and both made sounds that are not readily found in avian recordings. Finally, the owl took off, the raven followed, and just for good measure, a couple of blue jays couldn’t seem to help themselves and joined in the ruckus.

But back to the title: These majestic birds are able to incubate eggs successfully, even at temperatures as cold as -27.4 degrees Fahrenheit (-33 degrees Centigrade)! Think about that the next time you’re muttering about the temperature outside, while you’re sitting inside, all warm and cozy, sipping your tea.

Have you found a Great Horned Owl? Let us know in the comments below!

Do your friends enjoy great bird & nature articles too? Share this article with them and let us know what you all think by commenting below!

Tag your photos with #maplewoodroad on social media and share them on our Facebook page! Have any questions about this recipe? Ask on our Maplewood Road Community Facebook page and I’ll be happy to help.

Subscribe to our weekly newsletter for more great articles!