Nature » A Shorebird in the Forest? Meet the American Woodcock 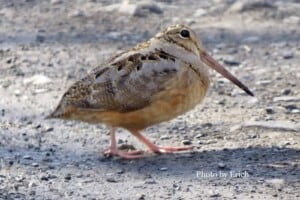 The American Woodcock (Scolopax minor) is a strange bird. He’s a member of the shorebird family, which includes elegant curlews, fast-running sanderlings, cryptic plovers, and more. And then there’s the American Woodcock. A plump bird about the size of a robin, with no apparent neck, an oversized bill, and hardly any legs. A meatball on a stick.

And not just that, “shorebirds” are expected to be found near water. These birds obviously didn’t get the memo! They live around us in wooded and shrubby areas adjacent to fields, far from any crashing waves and sandy beaches. They are widely distributed in the Eastern US, but good luck finding one. Their camouflage is so perfect that they don’t even bother to run or fly away until you nearly step on one.

This bird lives on a diet of mostly earthworms and other invertebrates that it finds via touch by probing their long bill into the soft ground. So, in winter, the northern population of this species migrates to the southern US states. But as soon as the ground up north softens up, this bird is on the move back to their breeding grounds. It’s one of our first migratory bird species and arrives as early as the end of February.

That’s when it’s time to get out and find this awesome bird. In our area, I have the best luck finding them along fallow farm fields bordered by forests. Once I locate a few potential good habitats, I wait for a clear, calm night between the last week of February and about the end of March, and head out there 20 minutes before official sunset. Be patient. The American Woodcock is one of the last (during dusk) and earliest (during dawn) birds to display, except for strictly nocturnal species. So when the last geese have honked overhead, the last crows have finally settled down, and the last light is about to be gone…suddenly you’ll hear “peent.” Bingo!

Twice a day in the early spring, during dusk and dawn, males perform very conspicuous courtship displays out in the open, often with multiple males showing off on the same stage. They start out by giving a buzzy peent call from the ground, then launch themselves into the air. This climb can reach a height of over 200 ft and ends with a steep dive back to the ground! Their erratic display also includes a distinctive, twittering flight sound. The twittering sound is made possible by air moving through small slits in the very outer feathers of their wingtips (the three outer primaries).

Now that you know how to find them, you have no excuse not to add this wonderful experience to your memory! But a word of caution: I wouldn’t approach a peenting male with a flashlight on their display grounds. Just enjoy it from a distance. Why take the risk of interfering with its behavior and maybe even stressing the bird to the point that it leaves the area and won’t be able to find a mate. These birds are already under duress by being hunted and exposed to heavy metals like lead that have accumulated in their primary food source, earthworms.

Let me know if you were successful in finding some woodcocks and share your most memorable moment from these little meatball’s performances. Try to record their peenting and wing twittering with your smartphone and share it here.

Have you been able to find the American Woodcock? Let us know in the comments below!

Do your friends enjoy bird & nature articles too? Share this article with them and let us know what you all think by commenting below!

Tag your photos with #maplewoodroad on social media and share them on our Facebook page! Have any questions? Ask on our Maplewood Road Community Facebook page and I’ll be happy to help. 😊

Subscribe to our weekly newsletter for more great articles!