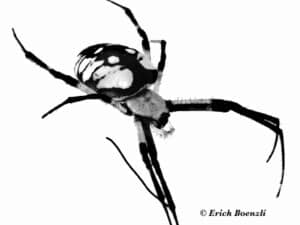 Ok, I love spiders. They’re some of the most amazing creatures on earth. There are 37,000 known species and many more unknowns. They live on every continent (expect Antarctica). They are everywhere, but are very good at hiding.

A spider is an arthropod. Their legs are jointed and the body has a rigid outer skeleton (exoskeleton). Spiders differ from other insects in that they have eight legs (instead of six) and a body with two parts (instead of three). 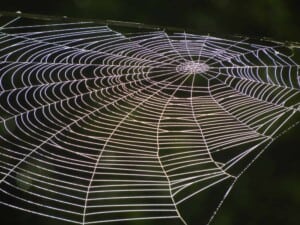 I love to watch common orb-weaver spiders building their beautiful webs. One of the more stunning sights is seeing their webs in fall with some morning dew on them. Nearly all spiders produce silk, the material necessary to build a web. Nearly all spiders produce venom, which in our area, when bitten, shouldn’t be worse than a bee sting. But if you find two puncture marks on your body and you’re not feeling good, have it checked out by a doctor anyway.

Besides orb-weavers, other interesting spider species you can find in your garden are jumping spiders, crab spiders, and hunting spiders. They all have very different lifestyles and each is worth studying, but they all have one thing in common...hence the title of this article. Figured it it out yet?

Maybe spiders are not your thing and you wonder why you should even be reading about them.

We should learn about spiders because of what they eat most: insects. Spiders are vital to a healthy ecosystem. They eat harmful insects and pollinate plants. Spiders eat more insects than birds and bats combined! Spiders do what some people use poison for: controlling insects in and around your house and garden. 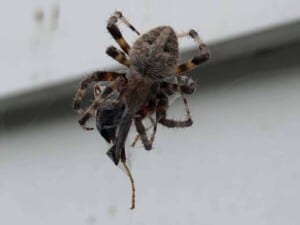 We’re all familiar with how orb-weaver spiders get their meals: they build a web at a promising location, go hide in a corner of the web, wait for an insect to hit the web (the vibration from hitting the web will give the spider clues about the size and location of the prey), run up to the prey, bite it, and wrap it tightly in silk (is that how somebody came up with that cellophane  wrapping machine at airports?).

Another awesome one is the jumping spider, which hunts by sight using its eight eyes in three rows; the front row has four eyes, with a very large middle pair. They are short legged and rugged looking and take care of stink bugs, leafhoppers, and mosquitoes. Jumping spiders have the best vision of any spider species, being able to detect and react to movement up to 18" away! And they’re a lot of fun to play with. Locate a jumping spider on your deck and wiggle your finger slowly in front of it, starting about two feet away and slowly closing in. Notice when the spider detects your finger. At what distance does it take up an attacking stance? At what distance does it realize your finger is a little bit too big and jumps to safety? 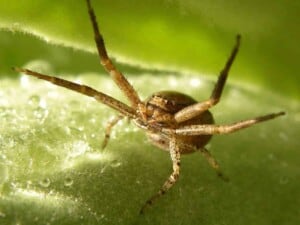 This is another super cool species. You might have never seen one (our common crab spider only gets to about ½ inch in size), but have probably been very close to them many times when working in your flower beds. They do not spin webs. Their first two pair of legs are longer and stronger than the last two pair of legs. They wait on a flower to ambush an unsuspecting insect that lands in front of them and then they attack. The larger females are formidable predators, able to attack and kill insects much larger than themselves. They are also not afraid when you get close to them (as shown in the picture above), but ultimately will retreat. One of the amazing things about this species is that the female can slowly change its color to match the color of the flower. Just amazing stuff!

These normally very shy spiders sometimes like to enter your house in early winter when it gets cooler and, because of their size, can stir quite some commotion if you’re not into spiders. My favorite member of this family is the fishing spider. Every year, there’s at least one that lives at our pond. It spreads its legs on the water’s surface to detect ripples from insects. Sometimes it also vibrates its legs on the water’s surface to attract prey, even small fish. Try to lightly tap the water in a corner of your pond and see if you can lure one out. The females can grow up to 1 inch in size. In Europe, I grew up with an even more crazy adaption of a hunting spider: the water spider builds a “diving bell” around its body and hunts underwater for tadpoles and small fish. Just incredible! Check this out:

I hope I’ve tickled your curiosity to pay more attention to these incredible friends that live with us in our backyards and help us keep the insect population at an acceptable level without having to use poison.

Do you know any of these spiders? Let us know in the comments below!

Do your friends enjoy nature articles too? Share this article with them and let us know what you all think by commenting below!

Tag your photos with #maplewoodroad on social media and share them on our Facebook page! Have any questions? Ask on our Maplewood Road Community Facebook page and I’ll be happy to help.

Subscribe to our weekly newsletter for more great nature articles!